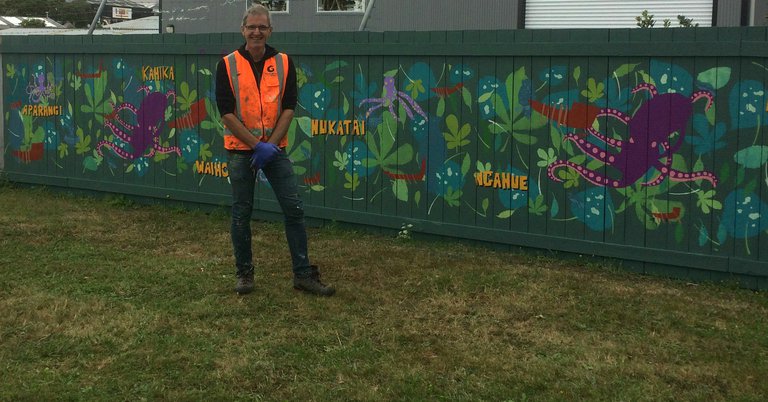 Chris Barrand with the new mural at Hukatai playground in Elsdon.

A new mural has added a splash of colour to a revamped playground in Elsdon.

Elsdon Residents Association, Porirua School students and artist Chris Barrand worked on the mural this week – which had input from Porirua City Council’s Graffiti Reduction programme  ­– using iconic shapes and suburb street names to create a unique wallpaper for a 10-metre section of the fence on one side of the playground.

The upgraded children’s area at the playground was finished in December. Improvements include a toddler slide with stepping logs, an all-accessible swing seat, seating and a picnic table, and a 30-metre long flying fox.

Initiated by the Elsdon Residents Association, through Porirua City’s Village Planning programme, it is the first project completed by the group since finalising its village plan in 2018.

After workshops, and feedback from pupils at Porirua School and the wider community, it was decided to make the playground more user-friendly for children of all ages.

Eleven fruit trees were also planted at the playground in September.

Western ward councillor Mike Duncan said it was a fantastic upgrade and paid credit to everyone involved.

“The mural is great and adds a nice touch of colour to the playground,” he said.

“This is an example of Council working really well with the community to come up with a win. The whole area will be well-used by the Elsdon community, of that I’m sure.”