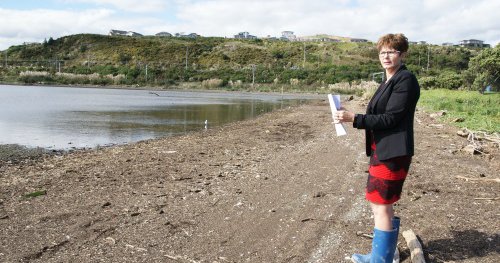 A major project to protect and enhance Te Awarua-o-Porirua Harbour will include the creation of a new wetland and sand dune area.

Above: Councillor Anita Baker at the site of a major Porirua Harbour restoration project due to start next week.

A major project to protect and enhance Te Awarua-o-Porirua Harbour will include the creation of a new wetland and sand dune area.

Expect to see diggers around the Porirua Stream Mouth later this month as they stabilise the erosion-prone harbour edge by recontouring and laying rock rip rap, plus create the dune to protect a new wetland area that will be planted behind.

“Our community tell us how much they value the harbour and this work is about improving its health, particularly the area around the stream mouth. It’s taken a number of years of planning and approvals to reach this point – so it’s really exciting to see work about to begin,” says Councillor Anita Baker, Te Awarua-o-Porirua Harbour and Catchment Joint Committee Chairperson.

“The potential for restoration of this area has been recognised in a number of studies and is a key project in our Porirua Harbour and Catchment Strategy and Action Plan,” says Cr Baker.

The project is a partnership with Greater Wellington Regional Council and will create a self-sustaining ecosystem to attract and support more native wildlife and plant life, while improving the way it looks for residents and visitors.

"It will really benefit everyone who uses and enjoys the harbour,” says Greater Wellington Councillor Barbara Donaldson.

The work is due to start later this month and take around 10 weeks. It will see improvements to the area from the Porirua Stream Mouth, behind Pak n Save, to the Semple St entrance, off Wineera Drive behind Big Save Furniture.

Rock rip rap will be placed on the foreshore around the stream mouth and at the Semple St end to stop erosion that has eaten away many metres of shoreline.

In between, a dune will be built up to about one metre using locally sourced coarse sand material, and the wetland will be planted behind. A stream that runs into this area will be diverted through the wetland.

“The work will return this part of the harbour to a more natural state of tidal sand flats and salt marshes that have been heavily modified over the years,” Cr Donaldson says.

The harbour walkway will remain open, with one small diversion in place, while the work is underway.