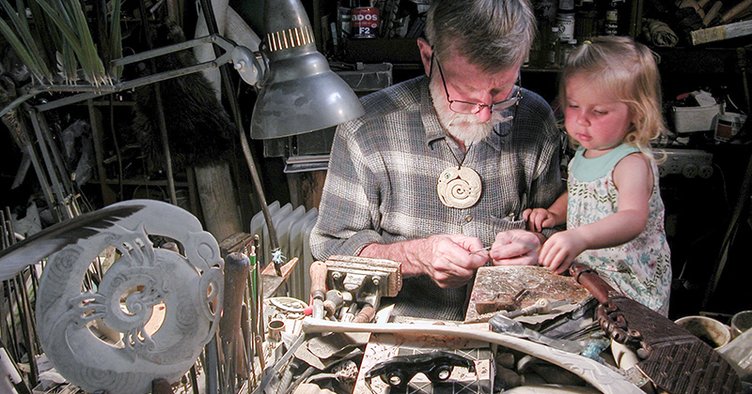 “There are very few artists in this country today who match his skill and technical expertise in the field of bone carving and small object sculpture. He is widely acknowledged as one of Aotearoa’s pre-eminent living artists in that field,” says Mr Friend.

Owen has been carving bone in Aotearoa New Zealand for 50 years. He became interested in carving through archaeology and museum work in New Zealand and overseas. After selling all 30 of his carvings in his first major exhibition in 1972, he focused on developing his career in bone carving and quickly established himself through regular exhibitions in Auckland, Wellington and Christchurch as a highly respected contemporary bone carving artist.

“Through his dedication to developing and refining the art of bone carving and sharing his technical skills with emerging carvers, Owen has played a vital role in the development of finely-carved bone as a medium and as a contemporary art medium today,” says Mr Friend.

Owen says it’s hugely rewarding to see 50 years of his work collected in one place at Pātaka. “It’s extremely satisfying as a 50-year statement, particularly as I was the first one to revitalise bone carving and teach bone carving in New Zealand. In the 60s there was no bone carving in the shops or galleries.”

For much of his career as an artist carver, he also lectured, presented workshops and taught classes in the techniques of contemporary bone carving at tertiary institutions and museums throughout New Zealand and overseas.

In 1986 he was asked to tutor carving at Whitireia Polytechnic, Porirua, and various other institutions. He continued to teach carving at Whitireia for 28 years, always part-time, allowing him plenty of time in his studio. Cultural background has always been included in his workshops.

As the exhibition’s title Dragons & Taniwha suggests, traditional Māori motifs and concepts are not the only source Owen draws his inspiration from. He’s visited over 70 countries and has gleaned something from each of them, but references to Māori, Scandinavian and Asian art remain among the strongest influences on his practice.

Awarua, Porirua’s legendary taniwha, is the inspiration for the whalebone taniwha that lends its name to the exhibition says Owen, while the Viking dragon references his ancestors from the Shetland Islands.

Owen's work is held in the collections of the Museum of New Zealand Te Papa Tongarewa, Auckland Museum, Canterbury Museum, The Dowse, and The Suter, as well as in a number of collections internationally.

In addition to exhibiting his work regularly in galleries and museums throughout New Zealand and Japan, he has also lectured and exhibited widely in the USA, UK, Scandinavia, the Netherlands, China, Canada and Australia.

A book showcasing his life and work – Owen Mapp: Dragons & Taniwha – 50 Years an Artist Carver –  is being released by Pātaka to coincide with the exhibition, which runs from Sunday 27 May until Sunday 19 August.